THE UMURM AND MODERN RITE,
AN UNCONTESTABLE REALITY.

For speaking today on this forum of Roosevelt Center, about Modern Rite is to talk about Foundation Rite of Freemasonry born as an utopia in 1717 , intended to mark a new direction in order to move towards a "Center of Union“.

An aside questionless fact is that the emergence of the first Grand Lodge in 1717 represents the major reversal with respect to the Masonic Operational tradition, and it meant the establishment of a ritualistic 'form' that eventually formed a first order ritualistic compendium especially when this product passes through the melting pot of France and ' les Lumières '.

It was when the "Rite of Moderns" became in a real tool able for analyzing the Masonic fact and present it under some certain patterns than will do it differently and unitary, while it will move it away from religious and esoteric issues, to which it had been pinned during as much time to some Masonic practices on English soil.

So the rite of 'Moderns' in France had a whole diversified development throughout the second half of the eighteenth century , but despite these guidelines and the different practices, they do not change their principal appearance as a space of individual development and of collective interaction that was covered of fanaticism and intolerance, being a place built just from love of all that human being represents, respecting their particularities , but agreeing on the need of a progress among all to a moral, ethical and intellectual development of mankind by exercising the responsibility of the free use of reason .

The need for a main ritual tool in an emerging obedience as GODF makes the rite of 'Moderns' constitutes itself in a real form of decantation that was what the Masonic world knows as ' Régulateur du Maçon '.

Subsequent political, ideological and social avatars made ​​crash the development of this unifying ritual, the "Régulateur” that lost importance in not knowing to respond at the urgent needs that other Rites itself folded. In this long journey of ups and downs, monarchists, rationalists, among others, our rite lost the nickname of "modern" to become permanently, at least on the mainland, in French Rite, and as an authentic reference to do and understand Freemasonry and the Masonic actions.

In other places, that rite of 'Moderns' remained faithful to the original project that so clearly saw those first Brothers of GODF on 1786 to have a homogeneous pattern and homologator ritual that eventually was conformed as "Modern Rite" and whose maximum exponent was its presence and development within organizations such as the Supreme Conselho do Rito Moderno - Brazil, where it has been in full effect for nearly 200 years.

On the other hand the need of being captains of the inheritance of the "moderns" parting from a basic “Center of Union”, located us today, after nearly 300 years, in a different way that want to place the key point of the Masonic arch in "Centre of Unity".

We are aware that this has not been achieved since 1717 until today, given the Masonic organizational structures that have evolved according to their needs and potentials, creating significant approaches but also serious estrangements despite working under a ritual similarity called Modern Rite by ones, and by others French Rite, and even also by the acrobats, French Modern Rite .

In this context of disunity brothers gathered around the Modern Rite, by several and varied ukases or disqualifications product of distance and also of ignorance, some brothers, we were aware of this weakness, and therefore believers for the need for being a reference Centre of Unity, and of course, to take responsibility for what we stand for as Masons, is what led to the year 2011 to create the Masonic Universal Union of Modern Rite.

This Organization powered by the Supremo Conselho do Rito Moderno - Brazil, Essential Philosophical Power of Modern Rite I had the honor to chair, laid the necessary foundations to the Masonic Universal Union of Modern Rite, born not as a body but quite the contrary , as an open entity and willing to unite with the rest of the Modern Rite Philosophical Potencies so desiring , initiatically regulars, respecting their independence and peculiarities, promoting a range of dynamics between them that allow growth and build knowledge on ritual, ethical, philosophical and social levels.

In a changing and turbulent world we are sure that our values ​​associated with our most popular Tri-motto Liberty, Equality and Fraternity, are in validity, and they need to be developed within our Chapters and Philosophical Potencies and projected to the outside individually and collectively displaying our own Masonic responsibility for the implementation of the studies, analysis and reason.

A full involvement in accord with a achieving more just and egalitarian society and a sensitive love by neighbor, and confident that the human being is in constantly growing that being shared with their similar ones.

The Masonic Universal Union of Modern Rite therefore is not configured as a macro structure that seeks confront to other existents or impose to the acceding Potencies on them, but simply from its moral authority emanated from their constituents bodies, aims to coat and build bridges between those practitioners of Orders of Wisdom of goodwill who wish it, and whose objectives were expressed at the time of its foundation:

1. Disseminate and promote uses and customs of the Modern Rite.

2. Encourage the interaction and harmony among its members in order to practice a truly Universal Freemasonry.

3. Be a plural forum for dialogue and exchange towards creating a true Union Center regardless of territorial, obediential or rituals quirks.

4. Facilitate rapprochement between the Modern Rite Philosophical Bodies through mutual recognition without any discrimination.

5. Develop a workflow and subjects of reflection between their joint bodies.

It advocates a tacit recognition by the named Organization, and have tools that allow both ritual and procedural excellence, in historical, educational and social aspects, in a truly universal framework.

We are experiencing a strong growth in the interest of our Rite, the oldest historically despite its name which was given at a time of ritual dissent by its opponents.

This growth is evident everywhere, but especially throughout the Americas must have been also highlighted the strong impulse gaining interest its development in Africa. It should not surprise us that the sustainability of our principles generates this positive expectation.

Never before was evident the perfect balance of Modern Rite between Tradition and Modernity, and especially the implementation of its commitment to humanity that each of its member assumes as a full and enthusiastic manner.

Finally, I want to remark that the Masonic Universal Union of Modern Rite will continue its openness, working tirelessly with all inclusive project that seeks to disseminate, publicize and implement our Rite anywhere on the planet to assist in achieving better human beings on a better society involved and aware of all that we have contracted an important task regarding inheritance that has been given to us which keeps us away about esoteric syncretism and religious beliefs.

The "Modern Rite" in all its diversity and guidance from its inherent secularism and Masonic Universal Union of Modern Rite wish to form part of this Centre of Unity that every Mason should want, and especially to those who are relatives, by fondness and requirement of the Masonic utopia which originated in 1717. 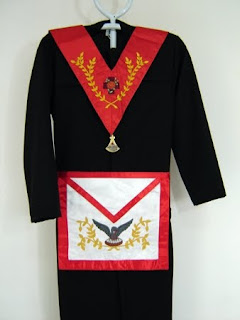