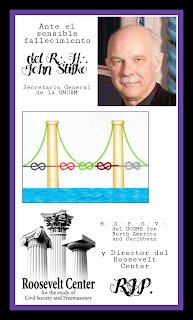 
Today I received word of the passing of one of my dearest friends, my most fraternal brother John Slifko.

Those who knew John knew he was no stranger to the world of Freemasonry. Those who did not know the man or his character may not have not realized that he frequently played a role behind the scenes to avoid controversy and to assure positive outcomes in any venture to which his name was attached. The path he trod was always guided by the highest ethics.

In his career he brushed shoulders and maintained relationships with some significant figures in American Cultural life. He maintained a communication with and interviewed Burl Ives, and was the personal secretary to Manly P. Hall for some time. He maintained close ties with people and organizations involved with Freemasonry and esoteric studies in Europe, North America, and Latin America.

John Slifko was an expert in urban planning and Freemasonry. He graduated from San Francisco State University in 1987 with a Bachelor’s degree in Urban Studies and Geography. In 1989, John Slifko received his Master’s degree in Urban Planning from the University of California, Los Angeles, and more recently received a Doctorate in Geography from the same institution. He served with Councilwoman Ruth Galanter from 1988 to 1989 as a Planning Deputy for Los Angeles International Airport. John also worked as a Legislative Aide and a Field Representative in Congress for eight years.

As Founder and Co-Director of the Roosevelt Center for the study of Civil Society and Freemasonry, John Slifko raised funds to support scholars and gave lectures, and tirelessly promoted the academic study of the fraternal organization of Freemasonry. He was a member of the Association of American Geographers, the American Historical Association, The John Dewey Society, and the Academic Society for Research into Freemasonry and Fraternalism. John Slifko volunteered for The Midnight Mission, which takes the homeless off of Skid Row and rehabilitates them into self-sufficient members of society. He contributed to the UCLA Foundation’s endowment, supporting the educational endeavors of the university.John Slifko was an active stock trader from 2000 to 2006, investing in green technologies.

In his spare time, he pursued the study of geographical mapping and exploration, as well as archeaoastronomy, the study of how past cultures understood the sky. He also participated in Healthy City, a California information portal that helps residents connect to health and social services and community data.

He was active in the quest to bring the Modern or French Rite to North America in recent years and instrumental in the work to bring about the foundation of the Higher Orders of Wisdom in North America and the Caribbean. It was in fact at his prompting that I chose to create the Hedge Mason Blog. He was active in the foundation of and the promotion of Project Awe, (Aesthetics of Western Esotericism) - Where Art meets Magic.

While he struggled with failing health against great odds over the last few years, he never dwelt upon his problems and continued to struggle relentlessly for those causes about which he felt passion and loyalty. He was a devotee of the Blessed Virgin and it was perhaps no surprise, as his wife Belinda noted, that he left this world on the day the Church celebrated the Assumption of the Blessed Virgin Mary (August 15)

Freemasonry has lost a true crusader and a gentle soul to the Eternal East.